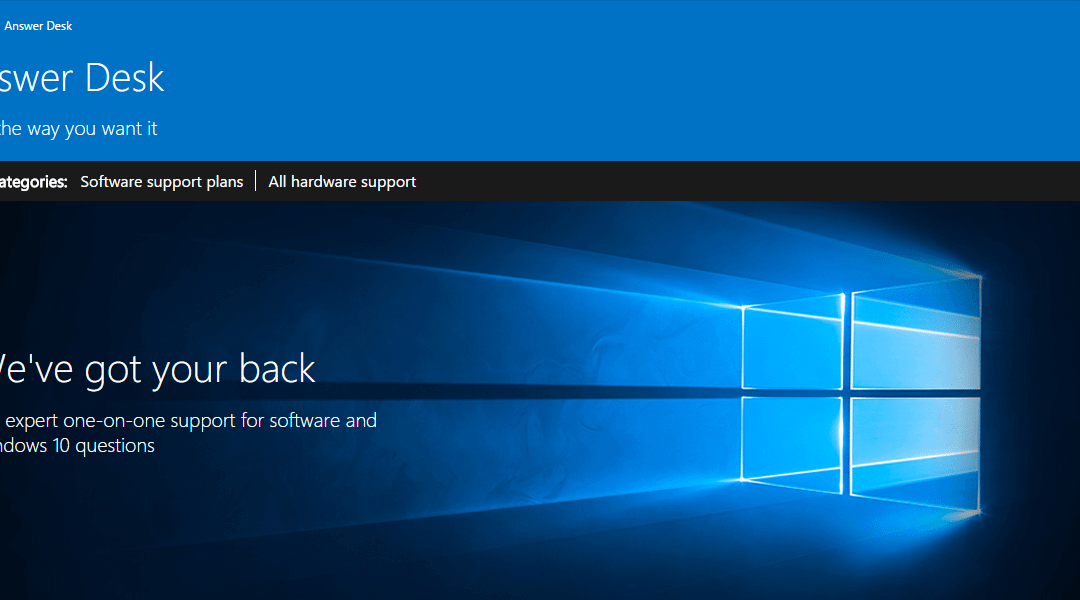 Since Windows 10 there is a new option available in your start menu if you search for “get help”, this will connect you to the Microsoft Answer Desk team for live support, which is also accessible via their website.

This seemed like a great feature initially, to have free support on tap, especially for non-technical people, but I am saddened (although not surprised)  to report, after testing it out several times, that Microsoft answer desk, for the most part, is bloody awful for anything except very simple issues.

So far in my experience, the so-called techs who work on the Answer Desk have little to no technical skills at all, they have basically trained monkey’s who simply search the Microsoft forums and knowledge base for answers and just follow the advice they find online or copy and paste them to you. They will suggest inappropriate solutions that have nothing to do with your issue or even your version of windows, or that could even damage your systems. On a couple of occasions, the support techs made a remote connection to my pc and searched heir own website for answers right in front of me.

After my first use where they could not help, I was advised to subscribe to their new ASSURE support plan, which would give me premium support for 5 computers. I took up this subscription hoping that perhaps it would at least get my family access to a better level of support, rather than just relying on me. But alas you still have to go through the same answer desk and deal with the same level 1 numpties first, but if they cannot help you then they will (if you are lucky) escalate to level 2 support, who might call you back if you are lucky.

The answer desk team have no problem blatantly lying to you. For example, they promised me every time that they will email me the case details but rarely ever did so. As a result, each time you contact them about the same issue, there is no reference number to give them, so you have to go through it all again every time. Once when I tried to chase up a missing invoice, the person claimed that they do not send out invoices, which is simply not true. They promise to follow up cases, and then never contact you again. the list goes on.

When you speak to them on the phone they will ask you to explain the whole issue, and will then transfer you to someone else, again with no reference number and will not explain anything to the person they have just transferred you to, so you will have to go through it all again. This can easily happen several times in a row as you get transferred from one dept to another as each person refuses to take responsibility, and then they will just randomly drop the call, and you will have to call back and go through it all again 3-4 more times because you still do not have a reference number.

One tech (and I use the word tech loosely) I spoke to when I was having ongoing Windows corruption issues, tried to get me to permanently run windows from a USB memory stick instead of from a hard disk, which I refused to do as this is clearly not a viable solution and it would make my system ridiculously slow and a USB memory stick is not big enough anyway.

Another tech tried to solve my issue by putting my system permanently (not temporarily for debugging) into clean boot mode and thus disabling all my third party services, such as my backup, antivirus, RMM, software updates, basically everything that kept my system secure, and promised this would solve all my problems. Luckily, since I am a tech-savvy person, I knew this was not safe and did not leave my system in this state, but a non-technical person would have just accepted this solution and been left with a vulnerable, unprotected system and no backups.

If you can get through to level 2 support then you may get some useful help from someone who actually has some technical ability, and able to solve your problem, but the level1 support is really only suited to those in the computer illiterate category, if you are a computer literate techy, they will drive you mad.