Disclaimer: There are affiliate links ahead, because why not!. My reviews & opinions are always honest and legitimate and I will never falsely recommend a product or service just for affiliate clicks. If you have a problem with this, just do not click the links.

I have been considering moving on from Siteground when my yearly hosting expires (read my review) and decided to give hosting a try, so here is my hosting ew.

Wpx hosting to have almost too good to be true reputation, with positive reviews everywhere and they boast that they have superior WordPress performance and support compared to all other WP hosts, and the reviews do seem to concur, especially this one.

So hosting quite a reputation to live up to and I have quite high hopes and expectations from them here. However the same was also true of SiteGround, it is very hard to find negative reviews, yet my experience with their customer service and support has very rarely been positive.

END_OF_DOCUMENT_TOKEN_TO_BE_REPLACED 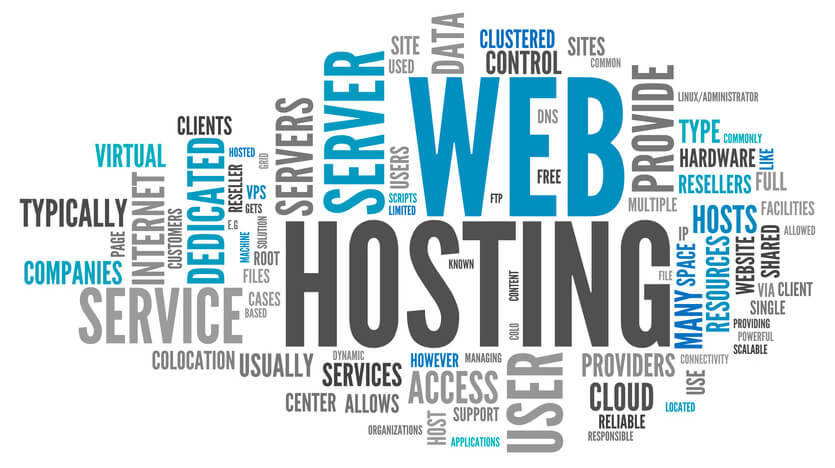 For websites and clients that need the best possible speed and performance for WordPress and are prepared to pay extra for it, I tend use FlyWheel, who are up there with the best of the best when it comes to WordPress hosting.  But for those small, simple, low traffic sites this can be a bit pricey, so I have been on the hunt for another hosting provider that had decent performance for WordPress without costing an arm and a leg.

I was originally running my  WordPress multisite installation on my Windows server hosted with Hostek, and while I generally got  pretty decent performance and scores, I knew  it could be better due to the fact that PHP and WordPress do not run as well on Windows, and need the likes of Litespeed on Linux to get the best performance.

Here I will be posting my results with the various hosting providers I have tried. Bear in mind that I have played dumb for the most part in order to test out their skills, support and knowledge, I have not told them I am an ex-hosting provider or have 30 years IT experience

One thing to note, which I have found to be true of every single host I have tried who claims “Managed WordPress”, it is nothing of the sort. At best all they do is set WordPress to auto-update, which is a feature now built into WordPress anyway, and if you are lucky also have some intrusion detection with some WordPress specific rules. The likes of WPEngine and FlyWheel do provide more features and security, but I would still not really call it managed.

Proper managed WordPress, is the service I provide, where your entire website is managed and maintained, plugins, themes, security, backups and monitoring.

I used to have my own site hosted with GoDaddy back in 2016 when I was first converted from CFML to WordPress, and while it was OK, the performance, in general, was no better than my Windows server, and often worse. I also had various recurring issues with not being able to upload files via the WordPress admin or via FTP. I can only assume that this was due to GoDaddy’s intrusion detection being overzealous and blocking legitimate activity.

This then brings me to the other major issue, GoDaddy support. Whatever problem I had, they would always default to the conclusion that the problem was at my end, and getting them to even look into a problem was a painful process, and getting them to accept the issue was at their end even harder still. Getting through to support was time-consuming. They got rid of ticket support and switched to phone only support, which meant sitting on the phone for ages in a queue, and some things are impossible to do over the phone, such as provide long complex or screenshots of your issue. They did eventually introduce live and brought back ticket support for Pro members, but It was quite normal to have to chase them and wait days or even weeks for a response.

I wouldn’t exactly say that GoDaddy is cheap compared to a lot of other hosts who offer the same, and for what you get it just doesn’t seem like good value for money.  Their so-called Managed WordPress hosting really isn’t anything of the sort. As with all the other hosts who claim to offer “managed WordPress”, all they actually do is automatically update the WordPress core and nothing else, the WordPress knowledge and support seemed very limited.

Those issues aside, there are some good things with the GoDaddy system. They have a very neat Pro member system which allows existing GoDaddy client to assign control of their hosting and domain names over to you for management. As far as registering and managing domain names goes, I cannot really fault them, all that side of things seems to work fine.

Overall I would only recommend GoDaddy for very basic sites, with low resource usage, where performance and speed not critical. If you have a resource heavy these that needs serious caching and speed enhancements to make it load quickly, then GoDaddy is not for you.

are one of those El-cheapo, seems too good to be true hosts with hosting that costs only £1. They are quite well known in my old ColdFusion/ circles, and I already had an account with them that I had used to test out their Lucee hosting a while, so I thought I would give them a try with WordPress.
Sadly my experience with this company to date has been less than brilliant. Nothing really worked properly from the outset, and I always had to open tickets right from the get-go to get anything working.

What should have been a simple job of resetting a password, turned into a fiasco of wrong passwords being reset locking me out of my account.
Issues with the control panel not working as expected to whitelist IP’s, not being able to remotely access databases and having to explain to support staff how / and telnet work and that if you cannot connect via telnet then any amount of password resets are not going to help. Even worse when they do not know the issue is actually caused by one of their own standard operating procedures.

Almost every time I used live chat I was asked to open a ticket, so that seems pretty pointless.

A lot of companies, especially hosts these days outsource their support to India, especially the cheap ones, as it is the only way they can afford to have a 24/7 helpdesk. Which is fair enough, I have done the same thing myself, but the key when doing this is ongoing performance reviews and quality control, which is clearly where HostMedia needs to invest some time based on my experiences.

I can certainly see that that for a non-technical customer who is not able to diagnose issues themselves or understand when they are being given wrong advice, simple problems could drag on for days while you get sent on a wild goose  and end up having to pay someone else (like me) to fix the problems for you.

I did finally manage to get a copy of my site running, and upon testing the performance, it was intermittent. Sometimes it was better than my Windows server, sometimes it was worse. Again their so-called “Fully Managed WordPress Hosting” was nothing of the sort, there was very little WordPress knowledge and not a lot of support and nothing being managed.

I would put HostMedia up there with 1&1 Internet. they are cheap as chips, and you get what you pay for. Ideal for folks that only have a token website, but really do not care about their website uptime or support, and just want it as cheap as possible. 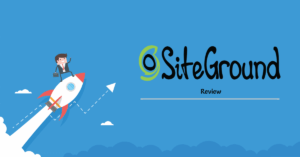 My SiteGround review turned out to be far more indepth, so I have turned it into a separate post HERE.

I had high hopes Krystal as they have very good reviews and I have seen several recommendations in forums I use, but sadly things did not go too well.

I signed up for their AMETHYST plan, which should have been sufficient as this is more resources than my site currently uses.

When I tried to a WordPress site, there was no option to have a temporary URL for testing prior to migrating DNS. The only option is to use your file for local testing, installer is not able to setup WordPress if your domain name is not already pointing their server. So the only way to install WordPress is via FTP.

I noticed they offered free migration, so I thought I would test out their migration skills and get them to migrate my site for me. They failed miserably at this and all they managed to do was to a default WordPress install, the rest I had to do myself.

As far as the performance goes,  things did improve on that front. On testing my site with GTMetrix I was getting slightly better performance even without using Cloudflare. By tweaking the settings and enabling Cloudflare I managed to increase the score a few percentages and also shave 3 seconds off the load time.

Sadly this is where the benefits stopped. I had nothing but problems on the WordPress backend with Divi builder timeouts and 503 errors. So rather than diagnose it myself, I decided to test out Krystal’s troubleshooting skills. Krystal support told me it was because resources were maxed out and I needed to upgrade to a plan with more resources and that this was a common problem with DIVI. Now I know this is not true since DIVI runs quite happily on 128MB, and I have been running with a max setting of 256MB for the last year with no problems, on multiple DIVI sites. The AMETHYST plan has 384MB, so should be more than enough.

I did, however, go through the motions, and upgraded to the Topaz plan which gives 768MB RAM. But surprise surprise, it made no difference, and I still had the same problems.

This was not the end and Krystal continued to try and push me down the upgrade path, telling me that my site still needed more resources. I suspected they would have pushed this until I had my own dedicated server, so I decided to quit while I was ahead. 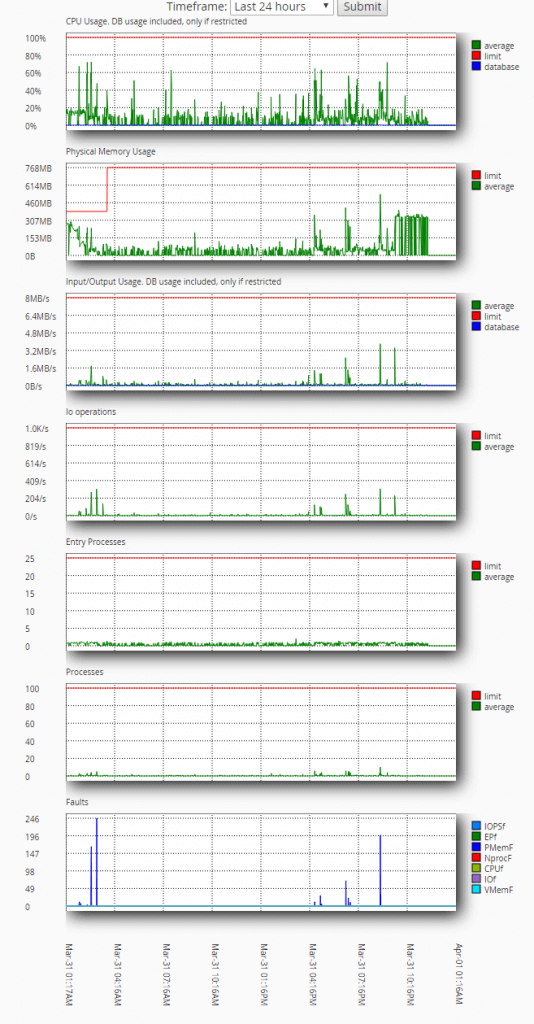 I checked the resource usage stats, which clearly showed my site was not maxing out at all.

I then did my own troubleshooting and found the cause of the problem, it was, in fact, the minify setting in W3TC, which was causing problems on this server for some reason. Disabling this got rid of the 503 errors and timeouts.

I am currently with GURU, whom I have been very happy with so far. Hosting is fast and the customer service/support is brilliant.