GURU is a host I had not previously heard of which I started seeing recommended more often on my WordPress groups, as usual with lots of positive feed and great reviews on the group and on Trustpilot, but nowhere near as much as the likes of SiteGround, which easily has more (shill) recommendations than any other WordPress host.

So in my quest to find something better than SiteGround, Guru next on my list to try out. I obviously wasn’t foolish enough to blindly believe the Trustpilot reviews, which everyone knows by now are usually biased and easily manipulated.

So here is my review of guru.co.uk WordPress hosting, in this review I am using their £19.95 reseller plan.

TLDR: I decided to stick with Guru, so I will be updating this review of their services over time.

Since I provide website migration services myself and ran a web hosting company for 16 years, I have obviously done hundreds of website migrations over the years and I know how to do it with my eyes closed. But anytime a host offers free migration, I will ask them to do it for me to test their migration skills, customer service skills, WordPress knowledge and overall competency.

I submitted a request for free migration and sent them a link to the backup which I had shared via one-drive. Unfortunately, they won’t accept links to backups you have done yourself and insisted I give them access to the site instead to do their own backups. I found this a bit weird, as it just makes the job more time consuming for them, but I provided a temp login and waited

3 days passed and still nothing, so I chased up the ticket only to be told they were too busy and it probably wouldn’t be done until next week now , which would have been another 5+ days. So I decided to do the migration myself instead as i wanted to get my performance tests done.

I have since submitted a few other sites for migration to see how long it actually took. I used my own site this time, which is a network consisting of 7 domains, and a few regular sites.

They completed the migrations successfully, however it did take them between 6-9 days for each site, which is pretty when you consider I can migrate a site in under 1 hour. So I wouldn’t rely on them if you need the migration done urgently, and you would definitely need to plan this well in advance of your old hosting expiring if you wanted to take advantage of the free migration.

I also want to mention this very useful ‘website preview’ option they have. I have used numerous hosts, but it is not a feature I have seen before, so I don’t know if this is a standard cpanel module.

This module creates a temporary sub-domain for you (or your client) to access and test the website prior to making DNS changes. Presumably, it creates a bunch of rewrite rules to achieve this, although they are not created in the .htaccess file, so I assume it is done at the level.

So far it has worked 100% and allows full testing of the website, and does not cause the WordPress redirect to kick in This is certainly a much easier solution than having to explain to clients how to mess about with their hosts file to tests the site.

The other major benefit with having this testing is that you can even run it through tests as well so that you can also tweak the site before making it live.

In their KB, guru recommends using the LiteSpeed cache plugin. I have tried this before on other LiteSpeed hosts and have never achieved very impressive results compared to other caching plugins, but on Guru’s servers, it has so far matched the performance of W3 total cache, with less effort.

Bear in mind that the tests below were not done during peak times, when servers will be more busy.

I performed 10 tests on the site using LiteSpeed, W3TC and LiteSpeed+Cloudflare. Only 6 tests on Pingdom as the variance is much less, and you have to wait much longer between tests as block you if you do too many too quickly.
I have compared against my old host Siteground, where I am using Cloudflare as standard as all sites are slower without it.

As you can see the difference between LiteSpeed Cache and W3TC is insignificant, LSCACHE wins by a fraction, although I have only use default basic config and not tweaked the advanced settings.

So considering how much simpler LSCACHE is to use, with minimal configuration, I would likely stick with this plugin, plus it will likely achieve better performance once I start playing with the advanced settings.

When compared to Siteground, the TTFB is about is almost 3 x faster and according to the page speed is almost 1s faster. 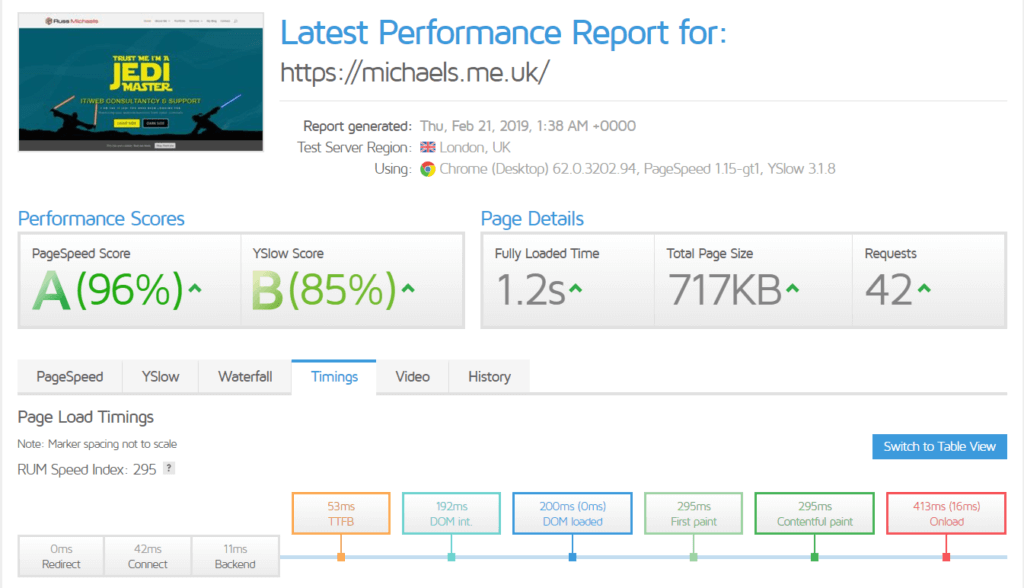 The loading times when compared to Siteground are not very different, but once I enabled cloudflare this took 200ms off. Guru’s TTFB once again is about 3 x faster than Siteground.

During my initial my tickets were opened in the early hours (past ) and were responded to within 2.5 hours. If this was during peak hours, I would be fine with that, as that is when they are busy. But I would rather expect responses to be quicker at this sort of time when most customers are sleeping and things are quiet.

Subsequent tickets I have opened thus far have been responded to much quicker and I have had no issues.

When I initially tried the live chat I got no response or it took a very long time, but I have since been told that they were having some issues with the live chat on those days and that this is not normal. I have not any such issues since then.

Apart from the time it took for the migrations, overall I have been happy with the service/support so far. All my questions have been answered and my issues dealt with.

On one of the sites I migrated, the Litespeed cache was not and threw an error claiming it was disabled when it wasn’t. They resolved this problem for me without any blagging or excuses or attempts to blame me or my other plugins.

So the experience so far has been quite refreshing compared to the type of responses I have grown accustomed to with Siteground, which were usually unhelpful, arrogant and condescending and would usually make every effort to refuse to help and make it “your problem”.

I have my fingers crossed that guru staff are more observant about their customer’s technical skills and respond accordingly rather than treating you as an incompetent muppet by default.

Based on my experience of the service and the support thus far, I determined it is significantly better than Siteground across the board, and so have decided to make the switch permanent and have migrated all my sites to guru.

Guru WAF (Web Application Firewall) protection on all their cloud servers by default, which monitors and protects against known attacks and intrusions.

On the reseller I can create a separate account for every customer/site and thus isolate them from each other.

Guru also does not allow remote access to by default, requiring you to use SSH. This might be a PITA if you need to use external tools which do not support SSH, but is good from a security perspective, as attackers simply cannot even try to hack into your databases, which otherwise affects server performance with all the daily hack attempts that occur.

In addition, they do not allow plain un-encrypted FTP, it is FTPS only. this is good.

When I was with siteground, the letsencrypt ssl renewal would regularly fail (silently), leaving my site broken until I noticed. I would then have to contact siteground support, get blagged and told the issue was with my site, have to argue with them and try to convince then it was an issue with letsencrypt and try to get them to fix it.

With Guru, the auto renewal happens in advance of the expiry date, giving you time to take action if it fails. When it did fail, it sent me an email to tell me why so that I could fix it. In every case it was due to no longer active aliases or sub-domains.

The first time it happened I did not realise I could fix it myself via cpanel, so contacted guru supported, and they simply fixed it without any blagging.

Here is my pros and cons list, almost all of these trump Siteground, who do not offer the same.

I have been told they are working on a staging option, which is great, and if they added a few other useful features in Cpanel, they would be pretty much perfect in my books.

I know these things can be done manually, so these are feature requests of convenience.

Well, it has been nearly 3 months, and I still have no complaints. There have been no major problems, all my sites are running fast and support so far has still been great.

They have responded to tickets in a timely fashion and have solved any issues I have had without passing the buck or fobbing me off, and I have not smelt a whiff of bullshit 🙂

I have been with Guru for almost 1 year now, and I am glad to report that I am still a happy customer. The support is still great and I have had no major issues or downtime to speak of.

The only complaint I have is that their R1soft backup solution has been broken since day 1. While the backups themselves seem to be working fine, it has not been possible to restore databases myself.

I always have to contact support and ask them to do the restore manually, which considerably delays the process since this must be done by support ticket and requires several confirmation steps.

They have informed that this is a problem with R1Soft not them.

Disclaimer: I use affiliate links (who doesn’t), this makes no difference to you, but gives me a small commission if you then decide to make a purchase from that company. Please note I do not ever recommend a product or service just to get clicks. Unlike a large proportion of reviews out there, my reviews are legitimate, honest and based on personal experience of actually using said product/service. If you have a problem with affiliate links, don’t click them, simples.