This issue has plagued us for a few weeks now with our WiFi connection apparently dropping. The WiFi icon in the system tray would show no problems, strong signal, no errors, yet for some inexplicable reason we would keep losing Internet access and web pages would not load. This would last anywhere from a  few seconds to a few minutes, with Google chrome giving errors like:-

This issue was not limited to just 1 PC either, it was affecting multiple devices and was causing some major problems with games, remote desktop sessions, saving pages, submitting forms etc. I tried literally everything I could think of, and every solution I found online, nothing worked. So now I needed to start thinking outside the box. I thought I would share my solution in case it helps others. 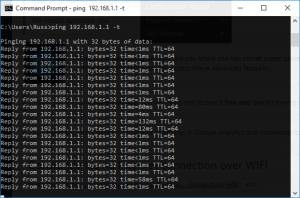 The first thing I decided to do was to check whether I was even able to access the router web admin interface when the issue occurred, and it turns out I couldn’t. So I decided to run a continuous ping in the background to see if there was packet loss, there was, in fact, it was now happening as often as every few minutes when 4 or more packets would be dropped and the ping would timeout.

The most obvious conclusion would be that it was the router, however, I had already swapped out the router a while back, so it seemed unlikely that I had 2 routers with the same issue.

Then there is the common problem with interference. However I had already changed the channels to that of neighbouring routers, I had also already tried turning off all possible interference devices such as TV’s in between me and the router or other wireless devices.

Perhaps there was some device on the network that was screwing up the routing tables or causing packet loss? So I reset the WiFi password so that only my PC could connect, and unplugged all wired devices and crossed my fingers. Sadly no dice.

Then I recalled an issue I had a few years ago in my old office where I lost my internet connection, and it turned out to be caused by the power adaptor from my VOIP phone, which was plugged in right next to my router and had become faulty and was leaking electrical interference. Needless to say, it took me a while to figure that one out, and I had blamed my ISP at the time and moved to Zen Internet, and had the same problem. It was thanks to the troubleshooting skills of the ZEN support techs that we found the cause, quite quickly I might add. 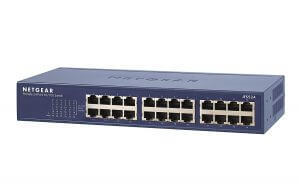 So I unplugged all devices near the router, but again no change. The only device still connected was my  Netgear 24 port switch, which I use to extend the number of ethernet ports on the router, surely this could not be the cause? So I unplugged it. Lo and behold, the packet loss stopped. I kept the ping running for several more hours, and have not experienced the random connection drop since.
I guess due to the age of the switch, it had developed the same fault with its internal power supply and was leaking electrical interference.

I have now replaced the switch with a much smaller and more appropriate 5 port switch I had lying around, which seems to be working fine.