Scammers have become so ubiquitous thanks to the Internet that we just take them for granted these days, you just cannot get away from them. You constantly bombarded with scams via email, sms, phone calls, social media, popups on websites, those of us who are savvy do not fall for them, but sadly there are still plenty of people out there who do get scammed and swindled out of their hard-earned cash by these despicable people.

So I had a phone call recently from this chap called Dale at Ed First (aka School Supplies Service aka the Educational Hub), asking me if I did IT support for schools, and how he was looking for providers in my area as currently, they did not have any and the schools were in need of IT providers.

I then went online and checked out the edFirst.co.uk website and it seemed to be just a simple directory website targeted at schools, who do little more than supply a printed version of their directory to the schools.  After a bit of googling, I found numerous feedback from others which confirmed my suspicions and those who had paid the fee to be listed had got no work from it.

I was absolutely sure it was a scam at this point, but to determine just how much of a scam, I called a few of my local schools as well. Unsurprisingly none of them had ever heard of this company and have never dealt with then and certainly do not use them to source providers or contractors. It seems even the printed catalogue is fake, as nobody I spoke had ever seen that either.

Since I posted this, I have received numerous threats and harassment from  Stephen Meredith in his attempts to get me to remove this post. Mr Meredith was one of the many directors at School Supplies Service (click link to see all the other involved people), although he seems to have retired in October 2019 according to companies house.

If you check the people involved with Schools Supplies Service Limited, they all seem to be involved with several other companies as well. One that specifically stands out as having many of the same directors is Tenders and contracts Ltd.

Known trading names this company is using includes: Edfirst | School Supplies Service | The Educational Hub and who knows how many other alias.

Below are screenshots from 3 of their sites, as you can see, same site, same phone number, different name. Although edfirst no longer seems to exist, I guess they had to shut that one down as it had become too well known. The educational hub seems to the name they are now using in their scam sales calls. 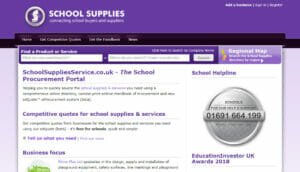 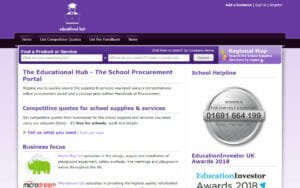 Never go by the score alone, always actually read the reviews, as is it a common practice that if a company is not able to get all the negative reviews removed (presumably because they do not want to pay or it is too time consuming) then they will instead try to hide them by getting a bunch of fake 5 star positive reviews to push the bad ones off page 1. This can still result in a company having a good score despite lots of bad reviews.