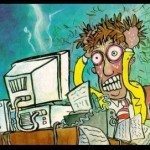 O2 and the phone of doom

You may recall from my earlier post “O2 customer service driving me insane” that I have not been having a very good experience with O2 support/customer service of late, and sadly things have not improved and if I had any hair then I would certainly be tearing it out by now, so here is my latest rant on the subject. 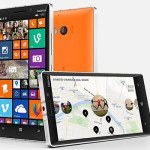 My last phone from O2 was a Nokia Lumia 930, which while being an overall good phone when it works, I have had ongoing problems with it and O2 and have had it replaced around 5 or 6  times now. Now most of these replacements were O2’s decision to just replace the phone because they could not be bothered to troubleshoot my issues, which on several occasions were to do with signal problems, call quality, sms messages going missing and the likes so replacing the phone actually made no difference at all. Yet they actually had the gall to tell me that they would  not replace the phone again due to the number of times it had been replaced already, even though most of the replacements were O2’s choice not mine and were due to their own laziness.  I have also since discovered that all the replacements I have received are refurbished not new phones, which probably explains why I have had ongoing problems.

O2 also has the default response to tell me to take my phone to my local O2 store so that they can take a look at it. I have taken my phone to the store twice when advised, and the store staff and the store manager has told me that they cannot fix phones so it is pointless O2 support telling me to take my phone there and they do not know why they keep telling customers to do it. They are not engineers,  and the most they can do is a factory reset or just follow the exact same canned response suggestions that O2 support have already given. The only thing the store can really do is just send the phone away to be looked at or repaired, which O2 support can arrange themselves anyway. Even when I tell O2 this, and advised them that the store themselves told me this, they still continue to suggest going to the local O2 store.

So my current issue with my Lumia 930 is that the search button stopped working which is quite annoying as it takes more effort to use cortana as well as search, I have now had 2 phones with this issue, and also a phone where the screen started to grow a corrupted color blob from one side which was getting bigger and bigger. I have wasted a huge amount of time on the phone, on live chat and on twitter with O2 trying to resolve this and getting no where as every person is as clueless and unhelpful as the next, it is like running up a down escalator.

I am certainly thankful for my OneDrive cloud storage and phone sync that is for sure, as have had to factory reset this phone so many times now because O2 required me to do so due to their standard response.

The last suggestion I had from O2 after weeks of back and forth was to book a meeting with an O2 Guru. I do wish I have taken screenshots of my live chat conversations as most of these are monumentally stupid. 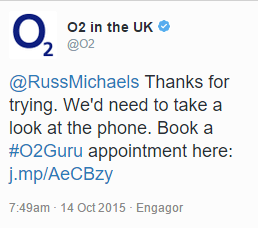 This is despite me telling them that the staff in the shop cannot fix phones, and I asked them to confirm if the guru was any different, and they advised me that he would be able to help me fix the phone. Needless to say I did not believe this, and was not going to make 2 hour round trip to take my phone to someone who would just give me the same response as my local store. So I booked an appointment but I also took my phone to a local repair shop and they advised me that it was the digitizer which was faulty and that this was a common issue with refurb phones. So I advised O2 of the issue. 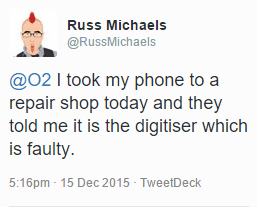 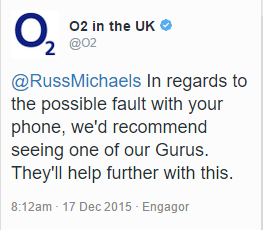 I then got a response from the O2 guru who I had booked the appointment with, and he informed me (as I knew he would) that he would not be able to help me with the problem and the phone needed to be repaired. So I then reply to O2 support and tell them this, and their reply was this. 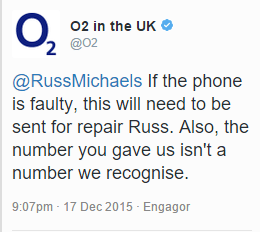 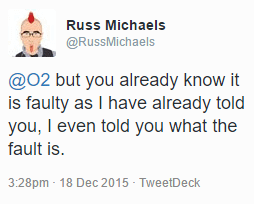 So even though they knew the phone was faulty, and knew what the fault was because I had told them, they had still told me to go to the guru who they knew could not fix such an issue. Not to mention that I had previously been told they would not repair the phone now due to the previous replacements.

During this whole process, just to wind me up a bit more, we were getting lots of unsolicited calls from one of O2’s sales/marketing agents called ADSI,  all the other numbers on my account were getting calls several times a day trying to get them to upgrade, no matter how many times they said that they are not the account holder or were not interested, the calls kept coming. O2 were just as helpful with this as well, they just said they did not recognize the number (see tweet above), further tweets did not help they just refused to take responsibility even though this company was calling on behalf of O2 with the details O2 had given them.

By this point I had started to hate my Lumia 930 thanks to O2, so as I had a couple of numbers on the account  which were due for an upgrade I decided to just cut my losses and get a new phone instead. Silly me for thinking this would be any easier. I tried many times to call O2 but was constantly stuck in a never-ending queue, same with the online chat. So I sent an email to all the O2 addresses I had in my address book asking for someone to call me back to do an upgrade as I was unable to get hold of them. Did anyone call me back? No of course not, instead  I got a rather unexpected letter via email telling me that my (non-existent) complaint had not been upheld. I of course had no idea what complaint they were referring to, and the sender of the letter “Christine Marsland” refused to reply to me. so I had to take it to twitter yet again  order to get an explanation, which is when I was told that sending an email asking for a call results in a complaint being logged, WTF ?. 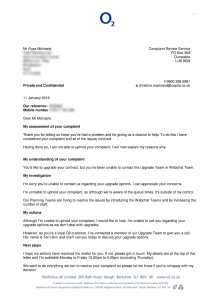 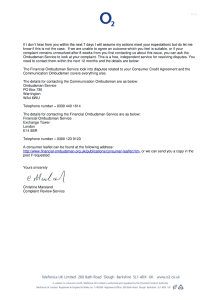 Not only did Christine refuse to reply to me but needless to say that “Terri-Ann” never called me either.