0x80300025 We couldn’t install Windows in the location you chose 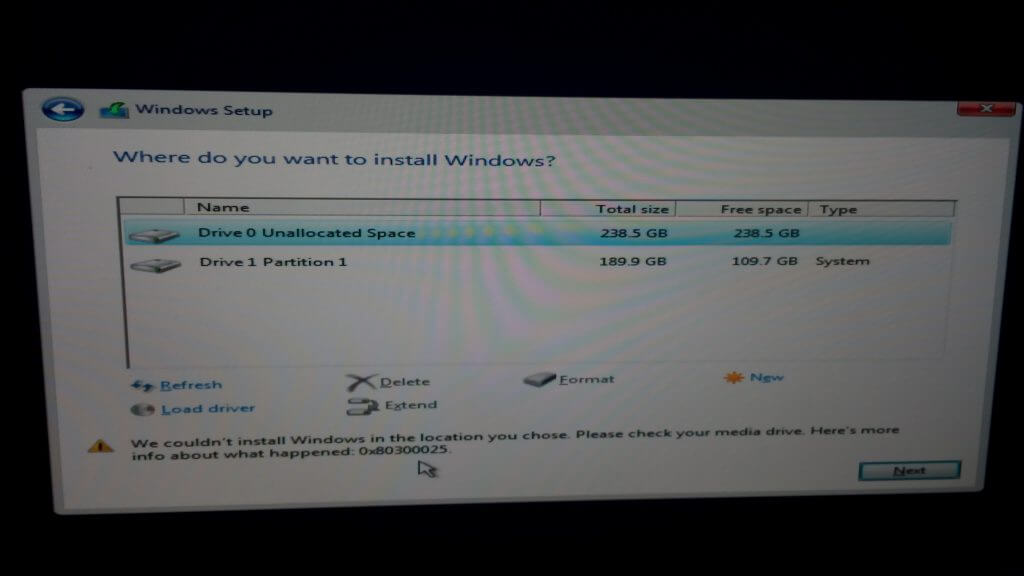 This was a very random and strange occurrence, suddenly my wife’s PC would no longer boot from the SSD drive, instead, it kept trying to boot from the secondary disk. Even when I accessed the boot menu in bios and told it to boot from this disk, it still refused.

So I booted from my Windows 10 USB stick and used command line tools. When I used diskpart, it was also reporting that the disk was empty and unformatted as well. I went through the usual repair procedures, but could not detect the previous Windows installation.

So since I did not fancy spending ages trying to fix this, I went to do a Windows re-install, which is really the easy option now we store all our data on onedrive cloud storage anyway, so nothing gets lost. But this is when I received the above error 0x80300025, We couldn’t install Windows in the location you chose.

The first thing I did was to disconnect my secondary drive, so that the system could not keep trying to boot from it. I then went into the bios to set the boot drive, but this time received another message telling me I could not boot from this disk with the current settings.  So I had to go into my bios and change the CSM settings to allow legacy devices as well as uefi.

Why this suddenly happened, and why I had to change this setting is a mystery, my best bet is that maybe my 5 year old accidentally got into the BIOS and fiddled with the settings when the system was booting. Although TBH I do not recall having EVER set this CSM setting before, I am pretty sure it has always been in uefi mode by default.

So the 2 steps if you get this issue are: disconnect other drives, check your bios/uefi settings.